The Splendid and
the Vile

Available in paperback 2/15/22
On Winston Churchill’s first day as prime minister, Hitler invaded Holland and Belgium. Poland and Czechoslovakia had already fallen, and the Dunkirk evacuation was just two weeks away. For the next twelve months, Hitler would wage a relentless bombing campaign, killing 45,000 Britons (30,000 of them Londoners) and destroying two million homes. It was up to Churchill to hold the country together and persuade President Franklin Roosevelt that Britain was a worthy ally–that she was willing to fight to the end. 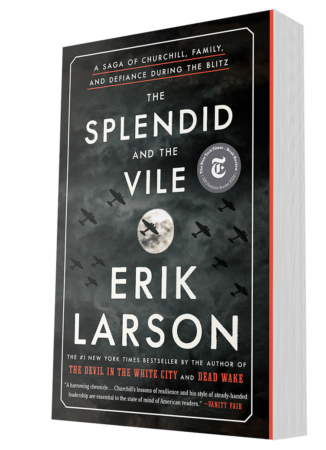 
Listen to the first work of fiction from Erik

No One Goes Alone

Erik’s first venture into fiction is an otherworldly tale of intrigue and the impossible that marshals his trademark approach to nonfiction to create something new: a ghost story thoroughly grounded in history. Pioneering psychologist William James leads an expedition to a remote isle in search of answers after a family inexplicably vanishes. Was the cause rooted in the physical world . . . or were there forces more paranormal and sinister at work? Available only as an audiobook, because as Erik says, ghost stories are best told aloud.

Other Books by Erik